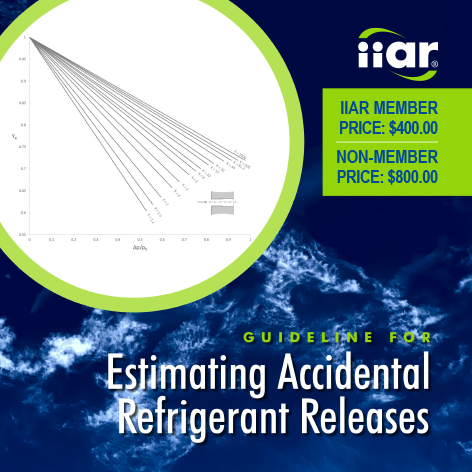 Type of refrigerant;
State of refrigerant within the system: saturated liquid, subcooled liquid, vapor, or two-phase;
Refrigerant temperature and pressure;
Geometry of leak opening, e.g., analogous to orifice, nozzle, or pipe flow;
Size of leak opening;
Duration of leak; and
Changes in system dynamics, such as changes in pressure and temperature.
This guideline includes both vapor-phase and liquid-phase (flashing and non-flashing) refrigerant leak rate calculations that are relevant to industrial refrigeration systems. The geometry of the leak location is limited to orifice-type flow, nozzle-type flow, and pipe-type flow, for example, openings that can be described as a round hole or holes described with an equivalent geometric diameter. Complex geometries such as cracks, seals, packing glands, etc., are beyond the scope of this guideline. Though this guideline does not explicitly cover release situations involving two-phase flow, pipe sections and system components with two-phase flow can commonly be treated like single-phase scenarios by determining if the leak site is located so as to entrain the refrigerant in a gas phase or liquid phase.
Purchasers of the guideline will have access to a computer calculation program that aids the user in quickly determining an estimated release quantity. Users of the program are encouraged to be trained on its use. An online training course is available to purchasers and IIAR members.